Key differences between Node-RED and Crosser in Industrial IoT

Almost everyone that has tried to do some experiments with IoT projects have come across Node-RED, whether this was for a private hobby project or a business application. The reason is of course that Node-RED is a great tool, easy to get started with, large community support and free!

Both Node-RED and Crosser have adopted a module based approach, where predefined modules are connected graphically to define the sequence of operations to perform on the data. This is a well-proven concept used in many business automation tools as well as data analysis/signal processing tools and allows non-programmers to define processes or algorithms.

For industrial IoT applications you will need modules to get data from your machines using common industrial protocols such as OPC, Modbus, Profinet, MQTT and HTTP. When implementing edge streaming analytics you want to deliver the results to other systems or services, hence you will need modules that can send data to different cloud services and on-premise systems or machines.

Finally you will need processing modules (data cleaning, normalization, filters, conditions, algorithms…) that can process your data to achieve your desired outcome. Both Node-RED and Crosser offer these capabilities. So on the surface the two tools may look similar, but there are some significant differences under the hood that have a major impact on the products.

Read more about ML in the Edge (Blog) →

*) Soon to be released

One of the major advantages of Node-RED is the extensive library of modules, almost anything you want to do is already available as a module and easily accessible through the integrated repository. However, many of these modules are provided by the open source community and this introduces some challenges.

Lack of consistency means that it is not always trivial to connect modules from different providers and you may end up having to add conversion logic to get data from one module to the next. In many cases, there are also more than one alternative to choose from for a specific feature, which one should you use and what is the status of these alternatives, have they been tested in production environments and are they still supported?

Crosser provides an extensive library of modules that covers all the common use cases for industrial IoT applications. These modules are built with a consistent messaging model and user interface and are production ready and fully supported. This greatly simplifies the usage and minimizes the risk. Modules can also be provided by third parties under similar conditions and it is also possible to build your own modules using our code modules or open SDK.

Modules are loaded dynamically into the generic runtimes (Crosser Nodes) when deploying flows. This greatly simplifies maintenance and continuous improvement of deployed use cases, without having to update the locally installed software. 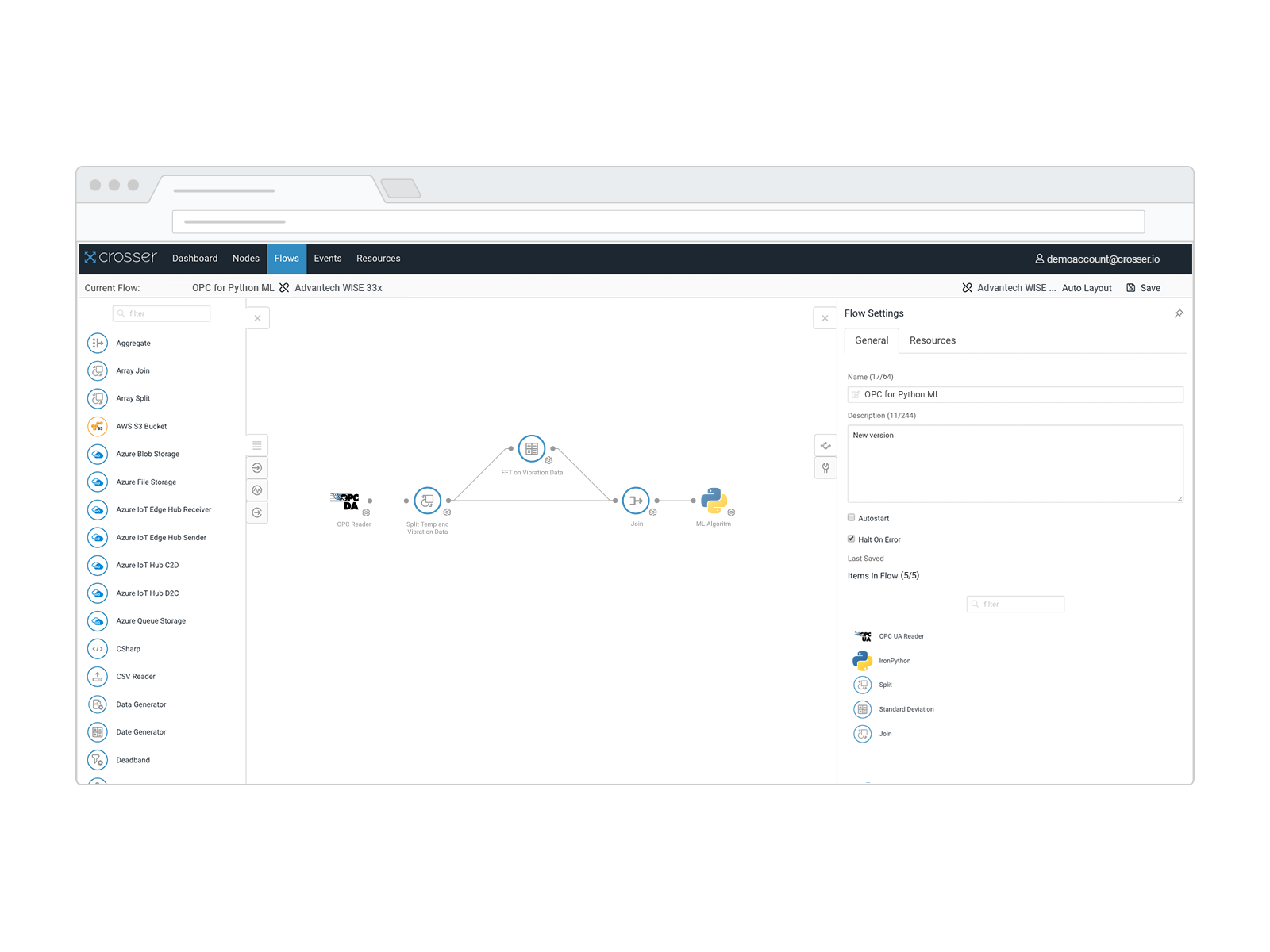 Before a flow is deployed onto multiple nodes in production it must be tested. With Crosser you can verify your flows step-by-step by checking the data as it passes through each module. See individual messages as they are being processed or plot sensor data with the time series graph viewer. You can test run your flows in a safe sandbox environment, available as part of the cloud service, or you can connect the flow editor into any of the nodes you have deployed in the field, to verify your flows with real data accessible from your distributed nodes.

Once the flow has been verified in the development environment, it can be deployed into production from within the same UI. If the flow is developed for multiple deployments, the user can deploy the flow with different settings/parameters into several different production environments at the same time.

So far we have only talked about a single node and how to set up processing using a graphical front-end. This is the use case addressed by Node-RED. In most industrial IoT use cases you have multiple edge nodes being deployed, often at different sites or even on mobile machinery. How do you manage such a complex deployment without adding significant life-cycle costs? Enter Crosser Cloud!

One Runtime, many Flows

Another difference between Crosser and Node-RED is Crosser's ability to execute many different flows on the same node (runtime installation). Existing flows can be updated and new flows be added without affecting other flows running on the same node. If one flow for some reason malfunctions, all the other flows on that node will still continue to run.

While Node-RED only offers the ability to run one flow containing subflows in each deployment. If one of these flows malfunctions, the whole node will stop running, and all of the flows will be affected.

The Crosser Cloud service is used to manage your edge nodes. This is where you build flows using the Flow Studio visual design tool and then use the Edge Director to decide what version of a flow that should be running on each edge node. In contrast to single node flow editors like Node-RED, flow building and deployment are clearly separated operations with Crosser, to allow for the same flow to be used on any number of edge nodes.

The Edge Director is designed to simplify the whole life-cycle management of Edge nodes, from on-boarding of new nodes to deploying new or updated flows and monitoring the operation of all your edge nodes. All operations can be performed as easily on a single node or a group of nodes. Groups are created by attaching labels to nodes, allowing for different schemes such as overlapping or hierarchical groups. Define groups that make sense for your use case and operate on these groups as easily as with a single node.

With the Edge Director you get version control of flows, modules and node software. Upgrades and downgrades can easily be managed on any number of nodes. Don’t miss out on added features because you don’t want to touch a working system.

The Edge Director capabilities, combined with the Flow Studio functionalities, unifies the proof of concept (POC) stages with the production stage into one environment. Removing several challenging steps from the deployment phase of your IoT project.

The Crosser Cloud is a pure management and configuration service. As soon as a flow is deployed on a node it runs autonomously, without relying on any connectivity to the cloud. The results of the data processing in an edge node is sent to wherever the flows specify.

Learn more about the Edge Director →

Using pre-built modules simplifies and speeds up the innovation process but even an ever-expanding library cannot meet all needs and requirements. Having different options to add customization is therefore important.

Security, which is top of mind among everyone looking to connect machinery to external systems, ie the Internet. The Crosser solution is designed with security in mind from the start. Some examples:

Finally it’s worth pointing out that the Crosser Solution is a commercial fully supported solution with a team of experts waiting to help you.

In summary, the Crosser Edge Streaming Analytics solution is a pre-packaged, production-ready solution for industrial IoT applications that provides great flexibility in terms of connectivity and processing options, while still being easy to use with minimal life-cycle costs.

Göran has 20 years experience in leading technology teams. He’s the lead architect of our end-to-end solution and is extremely focused in securing the lowest possible Total Cost of Ownership for our customers.

"Hidden Lifecycle (employee) cost can account for 5-10 times the purchase price of software. Our goal is to offer a solution that automates and removes most of the tasks that is costly over the lifecycle.

My career started in the academic world where I got a PhD in physics by researching large scale data acquisition systems for physics experiments, such as the LHC at CERN. After leaving academia I have been working in several tech startups in different management positions over the last 20 years.

In most of these positions I have stood with one foot in the R&D team and another in the product/business teams. My passion is learning new technologies, use it to develop innovative products and explain the solutions to end users, technical or non-technical."

Sign up for a free trial account for testing your ideas.
Connect to your data sources and test with real data.
Design and deploy your first Flows today!

Join our weekly live platform demo and have a chat with our experts. Choose between Industrial IoT focus or Cloud Data Integration sessions.